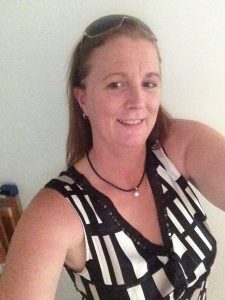 Josephine grew up in Melbourne, and at an early age had a desire to help people. From the age of 16, she knew she wanted to become a play therapist.
Now a proud mother of 3 girls, Josephine has lived in the Northern Territory for over a decade and has more than 15 years of experience in play therapy on her side.

Josephine first started her career in counselling as a youth worker for the Department of Human Services (DHS) and Anglicare in Melbourne. In an effort to expand her experience, she spent the last 6 months of 1996 working as a social worker at Hillside Houses in London, England.

On her return to Australia, Josephine went back to work for the DHS and in June 1997 transferred departments within DHS into the Child Protection branch. While there, she was trained in a variety of fields including Sexual Abuse and Child Suicide counselling.

Josephine created a small non-profit business called SSNAP (Supporting Smart Normal Adolescent People) in 1999. The objective of SSNAP was to provide a therapeutic experience away from home for groups of young people aged between 10 to 16 years.  These challenging adolescents came from a various backgrounds. During school holiday periods, SSNAP would organise and run a camp for these young people and giving them a chance to express themselves in a safe friendly environment. As part of these camps, Josephine learned a lot about the issues that young children really faced.

While Josephine’s path to do Play Therapy began when she was just 16, when she read the book “Dibs In Search of self” by Virginia Axline, her training really did not begin until 2003.

Keen to learn, Josephine went around the world to learn from other international Play Therapists.  Josephine meet therapists in the UK and USA. In 2003 Josephine studied at the University Of Northern Texas (UNT), the leading training facility for Play Therapy in the United States for 3 weeks.

Josephine began her Private Practise in September of 2003 and focused on its growth and development and supports the community by providing low cost and no cost sessions.

In June 2004 Josephine spent a further two weeks at UNT’s Summer Institute and was privileged to be one of the 12 world wide participants to do the Summer Intensive program that involves 30 hours of direct Play Therapy work in sessions and supervision.

In 2007 Josephine conducted a number of presentations and workshops for Darwin Family Day Care, Breathing Space, and the Northern Territory Department of Health and Community Services with projects to support parents who do not have extended families or other networks to assist them
2012 Saw Play Therapy Northern Territory move to a new commercial Premises,
Josephine was officially recognised as a registered Play Therapist/Supervisor with APPTA.
2012/3 saw PTNT offering more than 350 free Play Therapy Sessions to the community

From 2014 Josephine supported Charles Darwin University with the write up set up of its Play Therapy Masters course.
Josephine has remained a support figure for the course as an advisor and associate lecturer.
Josephine maintains a private practice supporting children from diverse backgrounds.
The practise provides therapy for children from child abuse backgrounds, NDIS plan managed and self-managed.
Providing services to a range of schools, remote communities, hospitals and non-government services.

Josephine convened The First Australian Play Therapy Conference. Running from the 21st to the 24th of May 2007 with over 100 participants, it was a huge success with a number of Australian and international speakers.

In 2008 Josephine secured Dr Garry Landreth as keynote speaker for the 2nd Play Therapy Conference and at this time she elected President of APPTA (Australiasia Pacific Play Therapy Association) and has worked hard to support the growth of Play Therapy in the Australiasia Region.

The 2009 Bushfires in Victoria provided the opportunity for APPTA to support child victims of this natural disaster, with a volunteer team of counsellors who worked with the children.   Josephine and the team worked for a week and assisted 81 children initally; with the longer term team returning to support the children and further assisting 100 children overall.  Josephine has had her account of this work supported with publications in APT magazine and recently having had it translated and published in the Dutch Play Therapy Newsletter.

2010 Again furthered Josephine’s quest to put Play Therapy on the map by creating the initiative of having an awareness day for Play Therapy, APPTA members and supporter’s celebrated this day for the first time on the 1st of July 2010.

In March of 2005 Josephine, at the request of the Palmerston City Council studied and wrote a report on what the young children of Palmerston liked and disliked about the suburban area they lived in. This studied involved contact with over 225 children.

In 2007 and 2008, Josephine held “Challenging behaviours and on How to be a better play mate” presentations for Breathing Space and Good Beginnings, an Australian family support service.

In 2007 and 2008, Josephine held “Challenging behaviours and on How to be a better play mate” presentations for Breathing Space and Good Beginnings, an Australian family support service.

Palmerston  @ 9! In March of 2005 Josephine, at the request of the Palmerston City Council studied and wrote a report on what the young children of Palmerston liked and disliked about the suburban area they lived in. This studied involved contact with over 225 children.  This has lead to things like improved skate parks and waterslides being a priority within the region.

Saw Josephine working with CDU and supporting Joanne Wicks with her research on Intensive play therapy methods.  Josephine has been named in Joanne’s research that was undertaken to support children in a remote community.

Josephine began to develop her clinical stages approach to “play therapy” this work has built the foundation to help with case conceptualisation to confirm and support how children progress through play therapy
Josephine and PTNT were included in a department of Education Grant this enabled PTNT to go to 5 remote schools in the NT to provide play therapy intensives.

This opportunity saw in just the first round of sessions 500 sessions being undertaken 70 children being seen with 35 successfully completing their therapeutic process.

Josephine and her team have achieved 16 remote intensives in the NT and supported more than 1300+ play therapy sessions reaching over 100 children, with more to come.
In August of 2019 and February 2020, Josephine undertook training in Timor-Leste. And provided 2 Intensives.
The first international intensive of its kind where by counsellor interpreters were utilised within the play therapy space to support the children attending the therapy. These intensives were seen by the services to be very successful.

Josephine will continue to support children in adverse situations nationally and internationally with her remote work.

Josephine will continue to support the 2022 Conference being held in Darwin.

Josephine regularly participates in Supervision with Dr Brandy Schumann RPT’s.  Dr Schumann has been trained by Dr Garry Landreth, one of the leading founders of Play Therapy.

Since 2005 Josephine has been writing articles for the “Top Ender” to assist with parenting advice and behavioural issues for children.   For the Australian Defence Force families.

Josephine presented at the APPTA conference in 2009 on the pragmatics of the use of child parent relationship training.

Josephine presented at the APPTA conference in 2011 on the use of Social Skills Play Therapy Groups.

Josephine Presented at both the APPTA and APT conferences in 2013 on Play Therapy Supervision being undertaken by the use of multimedia.

Josephine presented at the APPTA conference in 2009 on the pragmatics of the use of child parent relationship training.

Josephine presented at the APPTA conference in 2011 on the use of Social Skills Play Therapy Groups.

Josephine presented at the Help conference in Brisbane in August 2019.

In 2017 Josephine undertook to present an Introduction to Play Therapy Micro Practicum workshop.

This was well received and very successful.

In 2018 Josephine co presented with Dr Brandy Schumann at the inaugural Fijian come play with me fiji conference.   The workshops presented related to Play Therapy in Post Disaster situations and creating a therapy space with nothing.

She assisted with the write up and programming for the introduction of the play therapy course.

Josephine also assisted in the supervision of students and teaching of the course again in 2018 and 2019.

Josephine provided basic play therapy training in August 2019 being invested back to present on child sexual abuse training in November.

During the November PTNT provided Timor Leste with its first every play therapy Intensive with 9 children and this outcome was very well received that a visit was booked for February 2021.

Josephine was again asked to undertake training in the areas children being exposed to domestic violence and limited setting for children with challenging behaviours.

A further intensive was provided in Timor Leste within the February visit.  With much success within the second intensive as well.